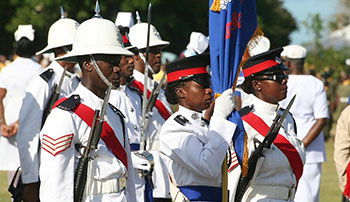 The Barbados Police Co-op Credit Union replaced the Savings Society of 1958 and was registered at the Department of Co-operatives on November 24th, 1960.

Officials of the Credit Union met in a small office (about 15ft sq.) at Central Police Station in shared accommodation with the Police Association. The first President was Inspector John Hutson. Other past Presidents included Harold Banfield, Harold Jones and Aviston Prescod. The first Secretary was Mr. Lionel Lloyd.

Major Ronald Stoute was Commissioner of Police who believed that there should be more than a mere Savings Society which was registered in 1958 and he threw his weight behind the Credit Union.

In the early 1980's The office of the Credit Union moved a few steps across the yard at CPS to building about the twice the size of the previous one. From there it moved to rented premises at James Street, in 1989 then to its present location in Lightfoot Lane in January 1993.

None of the recognized lending Institutions at the time, had any interest in Co-operatives. They were seen mainly as an extension of what is commonly known as a '"meeting turn." Members saved about $2.00 per month and to save $ 5.00 in those days was unique.

The Annual General Meetings were held in the Recreation Room at CPS. Numbers started to increase in the early 1970's as the Credit Union gained acceptance among members.

The Police Credit Union was the first Credit Union in Barbados to reach the million dollar Share Capital milestone and it has steadily grown due to the committed patronage of members.

The Late Bro Kenrick Hutson remarked in his speech on January 1978 to celebrate this achievement “….we are celebrating an achievement which can be considered as one of the landmarks in the history of the Barbados Police Credit Union. It was sometime during the month of August, 1977 that we reached one million dollars in share capital.”

In celebrating this achievement, it is requisite that some consideration should be given to the formative years of the Credit Union. The Barbados Police Credit Union, like many other organizations of its kind was established out of necessity. It was sometime in the late 50s that action to establish this organization was initiated. This was new ground being broken within the Force and no doubt, it was not a very easy task to have that type of sod turned….. if a peck or fork could have been used in the exercise, it would have been much easier; but unfortunately, it was a question of one person trying to influence others that the introduction of co-operatives within the Force was one of the most meaningful methods of

The three areas just outlined need no further explanation for their justification, but it was directly to the opposite in those early years of our formation.

You may then ask the question, "how did it ever come about"?

Mr. Seibert (Bettie) Chase was assigned to the uncoveted task. A man who if he was not made of stern stuff, there might not have been a Barbados Police Co-operative Credit Union. Mr. Chase, who, as Registrar of Co-operatives at the time was responsible for the introduction of co-operatives in the form of a Credit Union into the Police Force. His task was by no means easy. However, he persevered and with assistance of the Late Captain Wilfred A. Farmer, he was able to get a Savings Society started in 1958. The membership then was just around twenty (20).

It took two years before membership rose to a little over forty (40) and a Credit Union was registered. You can therefore understand the poor response given to this organization by members of the Force which at that time had an establishment of over six hundred (600). There was however, a small core of dedicated members who had confidence in the Credit Union and its principles.

Our membership continued to rise gradually and also our share capital. Members of the Force began to appreciate the benefits which could be accrued by the Credit Union and gave it their full support. Members made applications for loans for provident and productive purposes. In those early years, the maximum loan available to members was just about $500.00, but its maximum has risen over the years in line with the institution’s growth.

It is therefore fitting that we remember the words of a stalwart:
“We are aware of the substantial benefits which the co-operative movement can bestow on this country of ours and so, it is our aim therefore, to continue to maintain a high quality of service for our members by the best economic means.”